Warning: Declaration of ET_Theme_Builder_Woocommerce_Product_Variable_Placeholder::get_available_variations() should be compatible with WC_Product_Variable::get_available_variations($return = 'array') in /home/customer/www/arnoldgonzalesarts.com/public_html/wp-content/themes/Divi/includes/builder/frontend-builder/theme-builder/WoocommerceProductVariablePlaceholder.php on line 8
 About | Dr. Arnold Gonzales 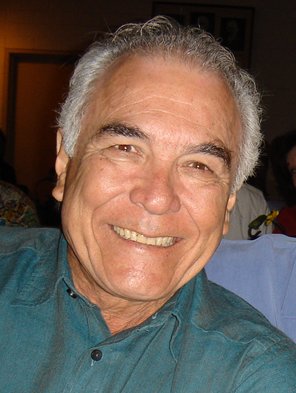 Arnold Gonzales’s artistic career has spanned five decades. His work has encompassed a wide range of styles including abstract, portraiture, landscape, and super realism. He has worked in many media including, acrylic, oils, pencil and pen and ink. His art has been showcased in numerous one-man shows, in public spaces, a national exhibition, and print and news media.

Born in Corpus Christi, Texas in 1939, Arnold Gonzales developed an interest in art in his early school years, graduating from Texas A&I Kingsville with a B.A. in Art, History and Secondary Education. After graduating from college in 1965, he taught art in the local Corpus Christi public schools and junior college, offered private art lessons, and began entering his work in competitions and exhibits. His work met immediate success and admiration, with some of his winning pieces selected for a traveling state-wide exhibition. He also became a leader in the local art scene, serving as President of the Corpus Christ Art League and President of the Corpus Christi Art Mart, a gallery which displayed and sold regional artists’ work. In 1970, he was also selected to present the then Treasurer of the United States with his recent painting of a Padre Island landscape.

In the 1970s, Arnold Gonzales turned to his other major interests, education and public service. He was accepted as a Mott Fellow in 1972 to study with the Community Education Foundation in Flint, Michigan. He received his M.A. from Eastern Michigan in Education Administration. In 1975, he received his Ph.D. from the University of Michigan in the same field. He returned to Corpus Christi in 1975, where he was hired as the Program Director of a county mental health department. Soon after, he decided to run for State Representative and served in the Texas State House for three terms. This was the beginning of a long career in the public arena. After his work in the legislature, Arnold Gonzales attempted a run for U.S. Congress, and then worked as a Deputy Land Commissioner for the State of Texas for seven years. After his work in Austin, he returned to Corpus Christi and was elected to the Corpus Christi City Council for four years, becoming the first Mexican-American elected at-large in one hundred years.

Throughout his career in politics and education, he continued to pursue his interest in art, always drawing and painting in his leisure time. While serving in the Texas Legislature, he tried his hand at political cartoons, making ink sketches of the legislators “in action” on the House Floor. His political cartoons were given a full page feature in the Houston Post. He also serves on the South Texas Art Museum Board and the Board of Directors of the Art Center of Corpus Christi.

In 2002, Arnold Gonzales was invited to participate in “The Faces of the Fallen,” an exhibition at Arlington National Cemetery. He was one of a group of artists from around the nation who were asked to produce portraits of service men and women who lost their lives in Iraq and Afghanistan. He created six portraits (sienna pencil drawings) of fallen heroes for the national exhibit, which was on display for over two years. The opening of the exhibit was covered in The Washington Post, with an opening reception attended by the Chairman of the Joint Chief of Staff and the Secretary of Defense. In 2003, he designed a similar exhibit of portraits of 26 fallen heroes from the Corpus Christi region. He designed and built a thirty-eight foot long Memorial of ten panels displaying the framed portraits. The “Fallen Heroes Memorial” has traveled to five cities throughout South Texas, and was featured on Fox News Houston and the Corpus Christi Caller Times. The Department of Defense has requested the Memorial  be displayed at the Pentagon, as well.

Recently, his work has resulted in two one-man shows. In 2002, the Corpus Christi Art Center exhibited his new abstracts, as well as painted portraits. In, 2009, his more current work in super realism portraiture was exhibited at the Ben Bailey Museum at the Texas A&M Kingsville University. The following year, he was invited once again to exhibit his current work at the Ben Bailey Museum.

Over the last several years, Arnold Gonzales has received numerous commissions to create portraits of leading political figures in South Texas, including a portrait of Dr.Cleotilda Garcia that is displayed in the City Library named in her honor. He was also asked to create a portrait of the namesake of Texas A&M Corpus Christi’s Nursing School. Throughout the last two years, several public spaces in Corpus Christi have requested to show his work in their establishment, with some of his current pieces presently on view in the downtown business district. Currently, Arnold Gonzales is in the process of fulfilling a commission from Texas A&M Kingsville to develop a mural that will be completed in 2012. And, in 2010, he  was honored with a request from the University of Michigan to submit all of his political documents, papers and achievements, as well as his art work, to be displayed in their permanent Archives Collection.

Arnold Gonzales’s primary goal as an artist is to create work that will reach out and connect with his viewers. His work aims to inspire, challenge and provoke his audience to reflect on what they see on the canvas – be it memories of loved ones, their own personal emotions and experiences that the piece evokes, an analysis of artistic technique, or even wonder about the subject or artist himself. His greatest hope is that the viewer sees in his work honesty and a deep respect for his subjects and the artistic process itself, and that they walk away from his work feeling emotionally and intellectually touched in some way.